skip to main | skip to sidebar

Early signs were showing that February the 7th was not going to be a disappointment for storm chasers. The GFS model indicated lifted indicies as low as -6c over the Central West and a weak upper level jetstream. This was associated with a shortwave trough predicted to move across the region near the time of maximum insolation, around 1500 EST. Boundary layer moisture was in abundance supported by northeasterlies up to 900HPa. Importantly, a dry continental mixing layer capped off this moist boundary layer above about 800HPa. A known contributor to storm separation and optimal insolation, this convective inhibition cap helps prevent convection breaking out too early and too abundantly as to reduce convective energy. Mid-level dry air, a characteristic of severe storm outbreaks, improved during the day as a layer of altostratus and altocumulus cleared. This layer is evident on the 4z Sydney Sounding. CAPE was estimated to be around 2200 J/Kg at 1400 EST. There was 20 kts of speed shear through the mid-levels between about 620HPa and 420HPa, and perhaps about 30 kts of directional shear backing about 90 degrees from a 20 kt NE'ly at 900HPa to a 25 Kt NW'ly at 600HPa.

Sheets of mid-level cloud threatened to prevent enough insolation occurring but these had mostly cleared from the Lithgow region by 1400 EST. In the clear air that followed, crisp congestus burst through the cap. Severe convection initiated after 1400 EST. A cell to the south of Bathurst quickly intensified, developing inflow bands, mid-level laminar curvature and a wall cloud. This cell came to dominate gathering in size and exhibiting strong rotation as it swept over Lithgow, but there was no observable tornado. It seemed to transition from an LP supercell to Classic and then HP after it had passed across Lithgow. On the eastern side of Lithgow, hail as large as 6cm was observed. Other cells then moved into from the southwest and merged creating a complex that tracked slowly slightly to the east of northeast.
Posted by Storm at 5:43 AM No comments:

The first image shows the first Lithgow storm which evolved from an LP Supercell. This moved E/NE'ly while another storm merged from the SW as seen in the second image. This is what caused an eerie darkness described in one of the pictures.

Sydney Sounding from Bureau of Meteorology 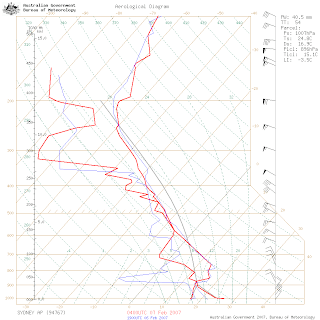 This sounding was taken not in the storm initiation zone. It shows the mid-level moisture that was apparent early on but which cleared before about 1400 EST from the storm initiating zone. A moistening of the boundary layer is apparent (the dry slot disappears) while a dry, unstable continental mixing layer, often associated with severe storm outbreaks, is capping it off.
Posted by Storm at 5:38 AM No comments:

Lowered Base and Wall Cloud on LP Supercell 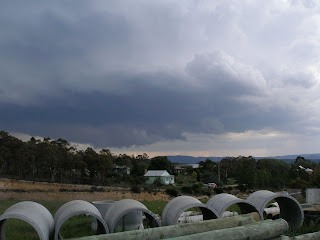 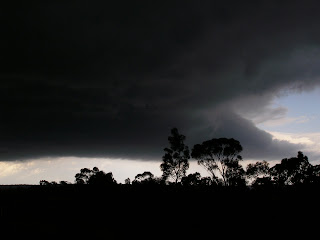 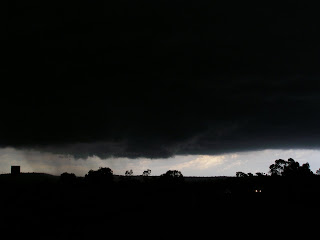 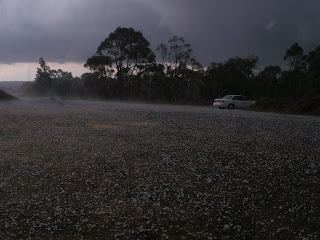 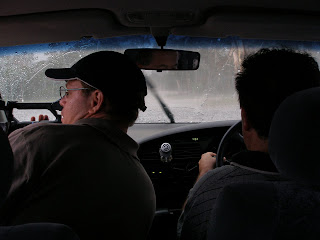 Storm
I studied Atmospheric Science as part of a Maths degree from Macquarie University and have worked as a Meteorologist for The Weather Company.